Clearing the bottom of underwater areas

The port water area is enough a large water terrain including the approaches to the port, roadstead and inner harbor where there are mooring structures for loading and unloading the cargoes.

In short, it is an area of water element which provides the ability for ship’s maneuvering and berthing and is designated by the defined borders. It is difficult to imagine how much underwater debris, sunken objects accumulate on the bottom of the water area during a certain operational period. For ships especially of small size, the lost anchors, single stones, log-snags, pieces of ground are a navigational danger which is called as accidental one. In order to exclude any even minor accidents as well as to increase passability of the approach channels for all types of the ships, provision is made for scheduled clearing of the water area of the berths, clearing of the water area of the ports from the foreign objects. The approach channels make it possible for approaching the ships to the mooring point which is located away from the main water area (river, seas). In a moment of passing the ship through the ship’s waves destroy the channel slopes eroding them. Flows, jet streams of water being created by ship’s movement also effect the state of the approach channels especially the open ones not having the guards. Because of these and other reasons the blind area of slopes is gradually destroyed, the navigable depths of the channel are decreased. This also reduces the passability of the approach channels and requires a constant monitoring as well as the appropriate dredging works. It would seem that the problem is insoluble, but the underwater debris and silting – it is all that what the special diving team does, having an experience and a professional equipment. 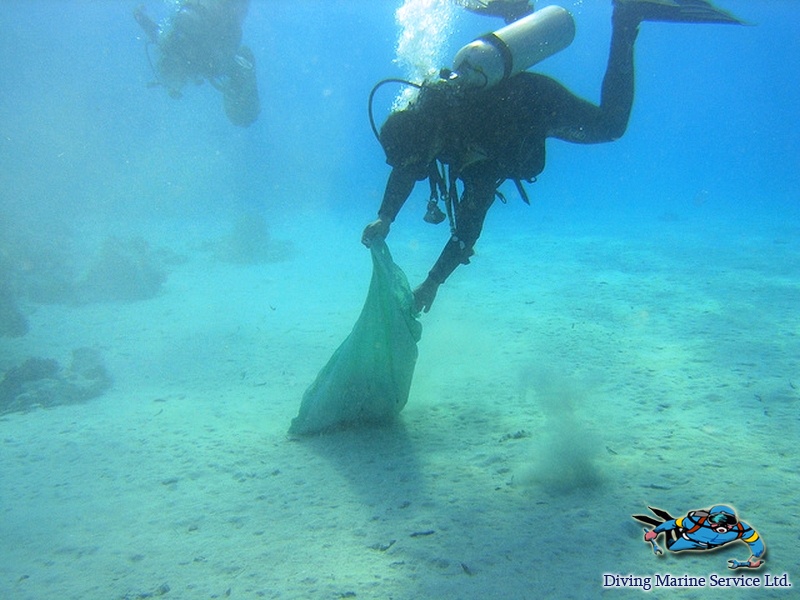 What the specialists-divers just do not extract from the sea as well as river bottom. These are the anchor chains, anchors of different sizes, fenders. But there are quite dangerous finds especially in those water areas where the military actions took place – it may be mines, large-caliber artillery shells. Clearing of the water area is not only important work but occasionally is rather dangerous and sometimes exciting one owing to the amazing surprises which now and again the bottom of water area presents. Rather recently in November, 2012 year, Seversky Donets river bed just “made happy” both the divers and paleontologists at the same time. The divers of the town Schastie which is situated in Luganskaya region have detected the bones of the most ancient mammoth while carrying out the clearing works of the riverbed in the local river. Mammoth bone fragments were not the only cause for wonder and joy. Besides the divers have found out the bones of ancient buffalo and elephants living in this territory of more than thirty thousands years ago. Certainly such finds do not represent a navigational danger but as to the historical value – undoubtedly. In a short, sometimes the underwater works as to the clearing of the water area can not only promote the normal operation of the water area of ports, piers but can give an unique material for historical, archaeological and other researches absolutely not ship repair but important as well.

The regular clearing of inner and outer water area became an integral part of life of all up-to-date ports of the world. As one of the most measures for ensuring the normal trouble free-operation, clearing of the water area is required for many reasons: first of all for decreasing the risks of the underwater part damages because of the large objects as well as increasing the passability of the approach channels. Besides clearing of the water area is required for environmental safety which is monitored both the state authorities and social organizations.