It should seem that the shipping routes, water areas of ports, berths, have long been studied however and today there is necessity in constant correction of depths and their control.

All marine charts, any navigation manuals are periodically reviewed and more precise data is entered into them. For any shipping – sea or river navigation, one of the significant problems is making-up, periodical up-date and replacement of the depth charts. So the hydro-graphical researches have become an integral part of the design and survey works, annual examinations and making-up of the certificate of the hydro-technical facilities. 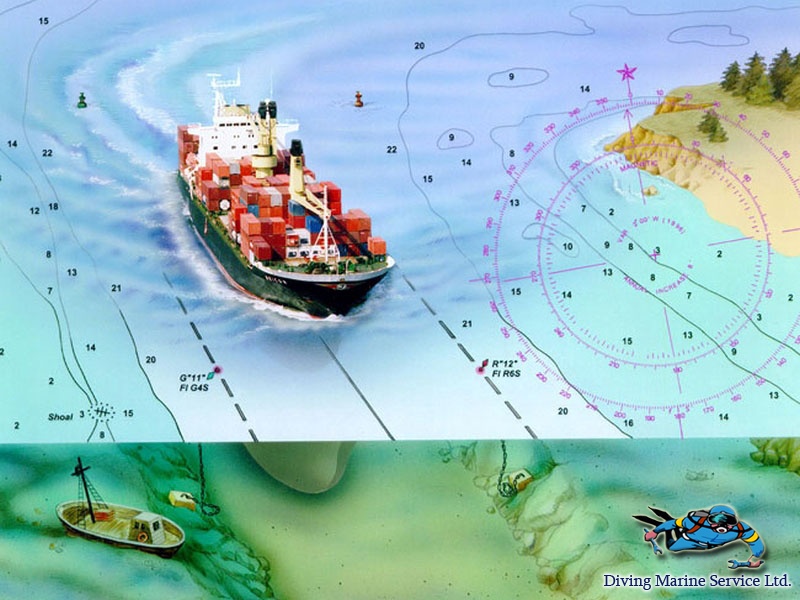 Sounding works – it is a set of actions directed for obtaining the information for making-up or replacement of the existing depth charts. The main tasks which are solved by the sounding works are as follows:

The hydro-graphic researches are also required for checking of conformity the port and offshore facilities to the design norms, for detecting the depth change that often occurs due to erosion, intensive operation of the ship’s propellers or repair scoop in the water area of the ports, berths.

Sounding works – these are specified methods of the bottom relief survey when the depth is sounded on tacks (lines) located at a specified distance from each other. The soundings depending on scope of the works, character of the bottom relief are carried out by means of the hand-sounding lead or a special echo-sounder. The hydro-graphical echo-sounder is a modern professional equipment permitting to make-up the bathymetric (underwater ) charts of bottom. The underwater relief is represented by means of isobats (lines connecting the equal depths) but the painting depends on the stages of heights, the larger depth the darker image. It is interesting that a method of bathymetry was used even in the XVII century by Dutchman Anselin, but at that time there were no, certainly, so sophisticated instruments permitting to reflect all relief features of the day. Today the hydro-graphical researches allow to get the detailed 3D charts which are required for construction or re-construction of the port and offshore facilities, indispensable for pipeline laying, necessary for scheduled survey of the different underwater objects, for inspections and so on.

Hydro-graphic echo-sounder is an equipment having a high degree of measurement accuracy. All structural parts of the echo-sounder such as emitters, transceivers are made as per the up-to-date technologies. The echo-sounder frequencies permit precisely to define the current depth as well as the type and density of the bottom relief and ground. The latest models of the echo-sounders are equipped with software, that considerably increases rate and quality of work. As a result — a contour chart of depths of full value in a set with 3D chart of the sea bottom.